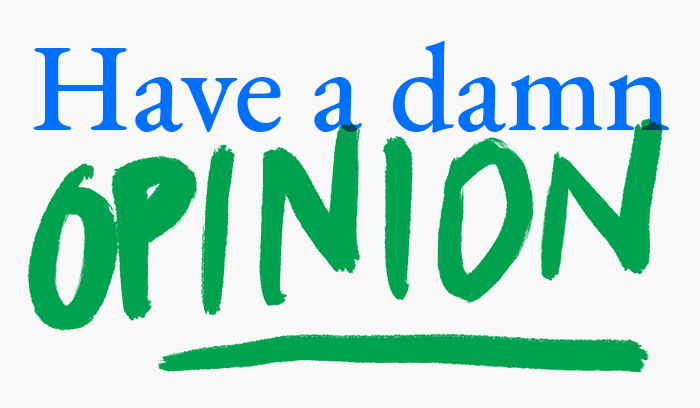 05 Feb Have a damn opinion

I stole that headline. It’s fantastically abrasive and the idea behind it is equally as hard to face.

Designers (and probably everyone else too) should be more brave and authentic to themselves. I read that headline at the same time I was self-censoring a post on Linkedin.

Linkedin is all about business, I thought to myself. You gotta be serious and curate your “workplace brand.” You have to make yourself more attractive to the next potential employer.

I realised my workplace brand is outspoken and involved. With a strong backbone of ethical design practice – and I shouldn’t hold that back. It helps me do great work. And it’s authentic.

It’s super easy to stop yourself speaking out and just sit on your ‘But’.

“But who care’s what I think.”

“But I gotta pay the rent”

As a designer you are employed to be a designer. That involves so much more than making the logo 10% bigger. If you’re a junior just starting out or a 20 year veteran, your authentic opinion counts for something. You were hired because the person who hired you couldn’t do your job.

Don’t get me wrong, if you’re going to tell me “I think it should be blue” then you better have a good reason why.

It’s damn hard to face our fear of speaking up. It’s more than just a confidence issue. It’s believing that you don’t need permission to be who you are. The credit belongs to the man or woman who is actually in the arena. Get in the arena.*

The path for overcoming fears is always straight through. Speaking up more and more creates more confidence. Sure some people may not like it and you may even lose a client, but this is how you find the ones who will appreciate you for who you are.

It will hurt for a bit but in time it will make you more resilient.

As graphic designer, artist and writer James Victore says: ‘If you play safe and choke back your voice, you are like a rudderless ship – taking direction from the waves’.

Learn more about being brave and authentic.

James Victore is a great inpiration for anyone. His latest book, Feck Perfuction is worth reading over and over. James is just ridiculously good and honest. He should be your hero. And sorry James for stealing your headline.

Brene Brown is also great. Her book on bravery, Dare to Lead, is a gripping read and will help anyone to be better at being true to themselves.

*Mashup of a 1910 Theodore Roosevelt quote. Worth reading the whole thing:

Theodore Roosevelt, the Man in the Arena. Delivered at the Sorbonne (Paris) on April 23, 1910.

“It is not the critic who counts; not the man who points out how the strong man stumbles, or where the doer of deeds could have done them better. The credit belongs to the man who is actually in the arena, whose face is marred by dust and sweat and blood; who strives valiantly; who errs, who comes short again and again, because there is no effort without error and shortcoming; but who does actually strive to do the deeds; who knows great enthusiasms, the great devotions; who spends himself in a worthy cause; who at the best knows in the end the triumph of high achievement, and who at the worst, if he fails, at least fails while daring greatly, so that his place shall never be with those cold and timid souls who neither know victory nor defeat.”